Since 1949, Forks Community Hospital has offered medical care to residents of the West End, right here at home.

Like local schools, businesses, and churches, a hospital is a key resource for a community. Our mission statement, “Pioneers in rural health; providing exceptional, personalized care“, clearly demonstrates our pledge to continue to provide high-quality, affordable healthcare services to the West End.
Forks Community Hospital is a public hospital district of Clallam County.

The first hospital in Forks was built by Dr. Ulrick S. Ford in 1929. The hospital eventually grew to occupy an entire block and Dr. Ulrick and his family lived upstairs. The hospital offered surgical services through the help of a nurse anesthetist and two visiting physicians from Port Angeles.

In 1932, Dr. Ford successfully campaigned for the state legislature on a platform centered around rural healthcare needs. His vision and energy eventually won the passage of the Washington Hospital District law in 1947. Clallam County Public Hospital District #1 was the first district formed in the state. Thus, Forks Community Hospital deserves to be called a “Pioneer in Rural Healthcare”.

The first members elected to the Clallam County Public Hospital District #1 Commission were Thomas Mansfield, George Warnock, and Paul Johnson. In 1948, the Chamber of Commerce offered to the district a three acre site donated by Thomas Mansfield and his brother. Plans for the new building (estimated to cost $170,000) were accepted and the hospital was completed and opened for full operation on November 5, 1952. Many of the hospital supplies (drawsheets, surgical and patient gowns, and towels) were made and donated by the Hospital Service Guild (now called the Hospital Auxiliary).

The hospital was originally named “Olympic Clinic” and charged an inpatient fee of $10.50 per day. Initially, Dr. Edwin F. Leibold from Minnesota provided nearly all the medical care (Dr. Ford retired from medical practice in 1947). Dr. Leibold practiced in Forks from 1947 to his retirement in 1986. He was known as a real “country doc” and was the only physician in Forks for many years. He ushered more than 800 babies into the world, tended to their health needs from “cradle to grave”, and climbed over logs and fought his way through brush to treat injured loggers. He and his wife also donated property to the hospital site.

In the 1950’s, need for competent emergency medical services was recognized, and Ray Ellis created the Forks Ambulance Service and trained community members to administer emergency treatment. The service is now named in his honor and has certified employed and volunteer Emergency Medical Technicians.

By 1956, the hospital had served over 63,500 patients. The commissioners of Clallam County Public Hospital District #1 officially changed the name to Forks Community Hospital in 1959. Voters approved a bond issue in 1969 to reconstruct the existing hospital and add 20 beds. Recognizing a community need, a long term care facility was added in 1986. Further expansion of the hospital and long term care facility was completed in 1994 and again in 1998. 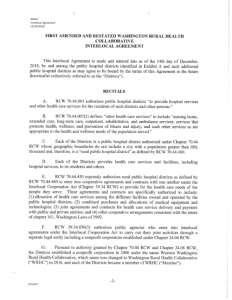